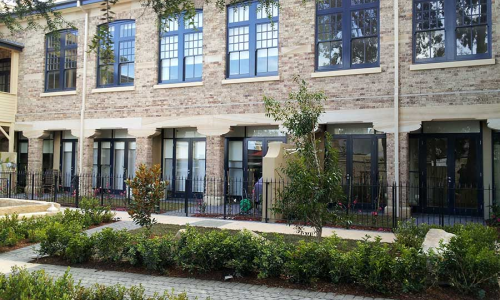 bokor architecture + interiors were commissioned as architects and interior designers by a private owner to complete alterations and additions to the existing enmore school development on Metropolitan Road, Enmore.

The building has strong local significance as it is listed in the Marrickville local environmental plan as a heritage item. The façade therefore remained and it was a conscious design decision to strip back the later applied paint and expose the original sandstock bricks.

The existing high ceiling school classrooms were converted into 15 individual apartments- from 1 to 3 bedroom. As a result of the heritage concerns, it was considered that the most appropriate way to convert the building was to do it vertically so that a series of apartments and town houses were designed which were all over two or three levels in the building. A mezzanine floor has been inserted over part of the first floor to protect the existing ceilings, which are considered to have strong heritage significance.

The existing internal courtyard, previously used as the children’s playground, were converted into a large common area and also will allow for private courtyard spaces adjacent to the individual units.

The objective of the development is to protect the heritage significance of the building, provide residential use for the vacant building and preserve and improve the current appearance of the streetscape.