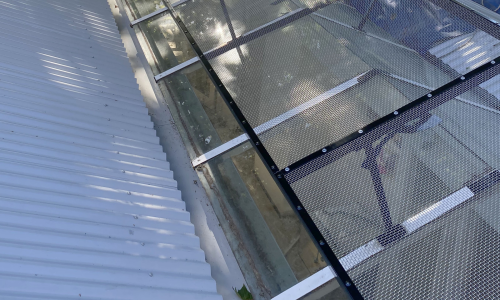 bokor architecture + interiors was engaged by the City of Sydney as lead consultant to design and manage upgrades to the existing buildings on the site located at 37 High St Millers Point. The site, owned by the City of Sydney and operated by KU Childrens Services was initially constructed between 1912 and 1924 and is listed on the State Heritage Register as a significant item. The Kindergarten was substantially redeveloped in 1995 at which time most of the early 20th century structures were removed, leaving a brick storage building, the sandstone boundary walls, and mature plane trees as the only remaining heritage elements on the site. Over time, falling branches and leaf litter from the plane trees, objects thrown from the laneway above the site, and the topographical depression at the rear of the site have caused consistent damage and ongoing waterproofing issues.

To address this, the roof was reclad with a high gauge impact resistant corrugated sheet, while rainwater fixtures were also selected to be impact resistant. Hazardous materials were removed from the roof cavity and replaced with new sarking and blanket insulation to improve overall thermal performance. Existing plastic bird spikes were replaced with stainless steel bird wire to prevent build up of leaf litter and steel mesh gutter guards were added to all eaves and box gutters to prevent downpipe blockages. At the rear of the site, the existing concrete footpath was removed and replaced over a new trench with a waterproof membrane, drainage cell, geotextile fabric, blue metal fill and a new ag drain to prevent the build up of moisture around the existing footings.

To protect the large feature skylight down the centre of the building, bokor designed a new steel framed shade structure with woven steel mesh panels to replace the original dilapidated opaque sail cloth shade structure. This allowed for an improved quality of light to internal circulation spaces and reinstated the view up into the canopy of the plane trees, while hinged panels along the sides of the new shade device prevent the build up of leaf litter, and facilitate periodic maintenance of the skylight and box gutters.

bokor managed a tight program to ensure that all issues were resolved prior to construction, so that the project could be delivered within the Kindergartens Christmas shutdown period, and that KU Childrens Services could reopen as planned with no adverse impact on parents and children.